Is it even possible? Another film about Pinocchio? There are at least forty of them to date, starting with the first silent film from 1911; Matteo Garrone's 2019 version with Roberto Benigni as Geppetto seemed to have put the final seal on it—at least for us Italians. But now Disney+ is offering its own live action and CG version by director Robert Zemeckis, starring Tom Hanks. It was most likely a hasty release, since yet another Pinocchio, on Netflix made by Oscar-winning director Guillermo del Toro, is coming out this Christmas.

Will audiences still find this story interesting considering they're beating it into the ground? Moreover, this story about a puppet who becomes a boy is no longer kid’s favorite book, as it once was when it first came out. But so what? Classics like Pinocchio are destined to be immortal. Jane Austen's novels come to mind, by analogy: they tell of times long gone, where girls’ only aspiration was to be chosen by Prince Charming and become good mothers that raised good children; women finding independence through their work was unspeakable. But “the universal” lay in the souls of those girls and boys committed to understanding what true love is and discovering the beauty of deeply experiencing love for their family and sincere friendships.

Pinocchio , on the other hand, is a coming-of-age story with a great variety of ideological and formal components that all ages can read (in fact, each screenplay writer has tried to come up with his own interpretation). The most famous theme is that of a Pinocchio who matures by making mistakes, answering to an honest working father (Geppetto) and a loving mother who is happy to take care of him (the Blue Fairy), with the help of the voice of conscience and under the constant rule of the law (the carabinieri). What Collodi wanted to tell us is in line with the morals of the bourgeois and industrial society of the late 19th century.

If Matteo Garrone's 2019 version is fairly aligned with the original text, Robert Zemeckis had another goal: to be faithful to the 1940 Disney cartoon. An initiative that should be framed within Disney's larger project of preserving, through versions with live actors, the copyright on its classics.

The 1940 version—which was certainly remarkable for its animation in that era—had already purified the text’s more violent parts and changed him from being a mischievous brat to a naïve child, clueless about life (for example, in the movie, Pinocchio doesn’t kill the talking cricket by crushing him, nor is he himself hanged). The 2022 version is faithful to the 1940 film to the point of largely reproducing the same sequences and having the protagonists say the same lines. 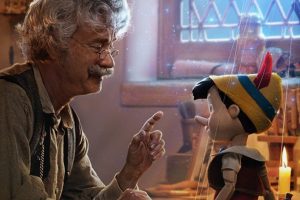 This remake, however, is worse than the 1940 version. There is a problem with pacing (the entire first part about Geppetto's life at his workshop is unnecessarily long and detailed). Various characters appear and then vanish without ever really being developed: the Blue Fairy appears only at the beginning to bring the puppet to life; the cat and the fox go about their business as Pinocchio's pranksters but then are never seen again. The songs aren’t memorable. Pinocchio has only one main goal that he repeats obsessively: to make his father happy—so much so that he always cheats himself. At least the moral aspects have been well-preserved: the cricket becomes Pinocchio's "minister of knowledge of good and evil and his counselor in moments of temptation."

The few variations from the 1940 version are: having intensified Geppetto’s grief, as he turns out to be a widower who also lost his son, and the introduction of a circus girl who tries to help the wooden boy escape the villainous Stromboli. Through this encounter, Pinocchio discovers the tenderness of affection with this girl who was inserted to make up for the lack of female characters. Toward the end, we see a substantial shift from the original text and any film version. After all, analyzing recent Disney productions, we might have expected this: special attention is paid to Pinocchio’s “being different.” Geppetto is grateful to Pinocchio for rescuing him, he loves him for who he is, and he does not feel like Pinocchio needs to be transformed into a flesh-and-blood child. Following this ending, it is very likely that there will be a sequel.