When a man is changed by fatherhood: three cartoons that show us how

When a man is changed by fatherhood: three cartoons that show us how

Can fatherhood change a man's feelings, emotions, and values? Here are three films that show us how being a father changes us, opening us up more to the world and to others.

Felonius Gru, a notorious criminal in his town, aspires to become the most notorious villain on the planet. His anger, spite, and disrespect toward others is rooted in childhood wounds of not feeling loved and not receiving the care and security he needed. His mother always belittled and ignored him, making him believe he was worthless. Now Gru seeks revenge on the whole world and tries to get the attention of as many people as possible.

Gru feels he has to compete with other criminals, especially with a "mysterious villain" who has stolen a famous pyramid. Our protagonist then sets himself a much more ambitious goal: to steal the moon. To complete his plan, however, he needs the help of three clueless little assistants. With his goal in mind, he goes to an orphanage and adopts three young sisters: Margo, Edith, and Agnes.

At first Gru is distracted and unnerved by their jokes and their constant need for attention, but he eventually becomes completely enamored with their tenderness, goodness, and innocence. These three little girls melt his heart, which had hardened over the years.

Stealing the moon no longer matters. Being a villain no longer seems like a good idea, since he now loves these girls, and they love him back. In this animated film, we see that when a parent deprives their child of emotional connection and respect, it can cause the child to make bad choices and to want to fill his deep sense of insecurity, at times even inappropriately. We also see an example of redeeming parenthood: Gru finally reconciles with his past, feels he’s responsible for these girls, and is committed to giving them everything they could possibly need. In giving his heart to someone—and not in receiving attention from the whole world—he finds joy and gratification. 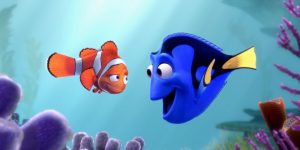 Marlin and Coral are two clown fish, living inside an anemone in the Great Barrier Reef.

Coral has laid over 400 eggs, and they are eagerly awaiting the birth of their children.

One terrible day, a hungry barracuda attacks them. Marlin takes a hit and faints while trying to save his family. When he regains consciousness, he discovers that his wife has been eaten… along with all their eggs. Only one egg remains intact. Widowed and deeply distraught, Marlin decides to name his only remaining child Nemo—as his wife would have wanted him named—and promises to never let anything bad happen to him.

The sense of protection that Marlin feels towards his son, while understandable, eventually becomes suffocating to Nemo. Nemo, in response, grows up and try to find his own place in the world. One day, after an argument with his dad, he swims so far away that he gets lost.

The entire film focusses on Marlin’s search for his lost son. Marlin does everything possible to find him and, with the help of some kind friends he meets along the way, he will be able to hug his son again. But Marlin’s greatest challenge will be to accept that he can’t stop his son from doing anything. He can’t stop him from living out of his own fear. He will come to understand that a true father must be present but not asphyxiating, an anchor, but not his son's “everything.” He becomes a guide who knows how to let his son walk on his own two feet. Oops… swim with his own two flippers, rather. 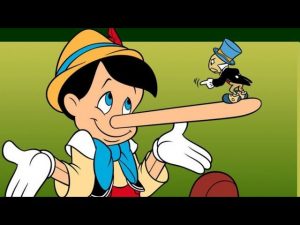 A great literary classic that highlights the importance of fatherhood, brought to life in films, cartoons, and theatrical shows, is the beloved Pinocchio. Originally written by Collodi, one of the best-known versions of this story is Walt Disney’s masterful 1940 film.

The protagonist is a marionette puppet, made by the hands of the old carpenter Geppetto, who magically comes to life!

Pinocchio, right from the start, proves to be inexperienced and naive, easily influenced, and susceptible to a thousand temptations.

As soon as he walks out the door of his house, Pinocchio behaves completely irresponsibly, making his father anxious. Geppetto, not seeing him return, goes in search of his son.

Pinocchio wants to become a "real boy," made of flesh and bone, but he will only be able to do so when he becomes responsible for his actions and is able to love his father in the same way his father has loved him.

The "transformation" from wood to flesh happens at the very end of the film when, in the middle of a storm—after having wasted his talents, up to that point, on things of little importance—he sacrifices himself to save dear old Geppetto from the raging waters.

The story seems to teach us that we become adults when we take an interest in others, when we leave behind childish egocentricity, and when we begin to take care of those who have given us life.

This masterpiece is certainly rich in themes that are to be explored more deeply; but, without a doubt, it is also a noteworthy film for all those who are interested in recognizing the central aspects of the father-child bond.

What do you guys think?

Write it in the comments!